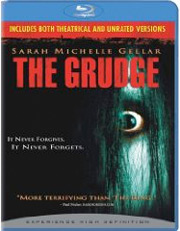 As we reported some time ago, the horror thriller The Grudge is on its way to Blu-Ray. While it was originally slated for a release this week, the title had been delayed and has now received a new release date.

From filmmaker Sam Raimi and acclaimed Japanese director Takashi Shimizu comes a terrifying tale of horror in the tradition of The Ring and 28 Days Later. Sarah Michelle Gellar stars as an American nurse who has come to work in Tokyo. Following a series of horrifying and mysterious deaths, she encounters the vengeful supernatural spirit that possesses its victims, claims their souls, then passes its curse to another person in a spreading chain of horror. Now, she must find a way to break this supernatural spell or become the next victim of an ancient evil that never dies, but forever lives to kill.

The horror film will come loaded with bonus materials, such as Two Commentary Tracks, one with Sam Raimi, Ted Raimi, Sarah Michelle Gellar and other cast members, the other one with Director Takashi Shimizu, Producer Taka Ichise and Actress Takako Fuji.

Also included are Deleted Scenes with optional commentary and a series of Featurettes covering ”The Myth of the Ju-On” or ”Sights And Sounds”. ”Under the Skin is another Featurette that is included, offering up a Medical Explanation of Fear Response in Film.

The release also comes with the Production Designer’s Notebook giving you a glimpse at the Sketches of Iwao Saito, and is rounded out by the Ju On Short Films “4444444444” and “In a Corner.”