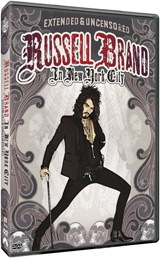 One of the most refreshing comedians of recent memory is coming to DVD when Paramount Home Entertainment is releasing Russell Brand in New York City in May.

British Pop Icon. rock Star. Ladies Man. The unexpected star and scene-stealer of “Forgetting Sarah Marshall” and the controversial host of the 2008 VMA’s, Russell Brand makes his Comedy Central debut with “Russell Brand in New York City.” Detailing the difficulty of handling his newfound fame in America, recounting the time he meet the Queen and instructing women on how to approach him, Russell Brand proves he’s the hottest thing to come out of Britain since The Beatles.

The fullframe DVD version will also include the Featurettes ”Loose Cannon Drunk Girl,” “An Englishman in NY (Russell Brand in Times Square)” and ”The Notorious 2008 VMA Monologue”.