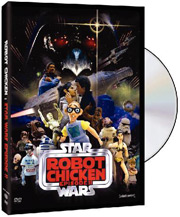 “Robot Chicken: Star Wars 2” brazenly combines the satirical sensibilities of Seth Green and Matthew Senreich’s (Stoopid Monkey Productions) Robot Chicken with the unforgettable moments and favorite characters of the Star Wars universeamong them, its creator himself, George Lucas. Transformed into the stop-motion animated characters that are the hallmark of Adult Swim’s Robot Chicken, and in conjunction with ShadowMachine Films (Alex Bulkley/Corey Campodonico), the Star Wars galaxy takes on an entirely different attitude.

Arriving in its original fullframe aspect ratio, the DVD will also offer up a series of bonus materials, such as a Video Commentary, a closer look at an Animation Meeting, a selection of Deleted Scenes and a Behind the Scenes Featurette.

For $19.97 you will be able to revisit the Star Wars universe chicken-style on July 21.