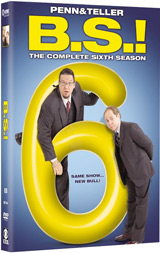 Paramount Home Entertainment has added the Sixth Season of Penn & Teller: Bullshit!, scheduling the title for a May release.

Arriving as a 2-disc DVD set, the release will offer up 270 minutes of uncensored – or censored if you wish – humor when it arrives in stores on May 12 for only $29.99.