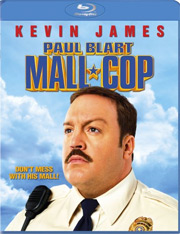 Sony Pictures Home Entertainment has added the comedy Paul Blart: Mall Cop starring Kevin James to their release line-up, adding the film to their May schedule on DVD, UMD and Blu-Ray Disc.

In “Paul Blart: Mall Cop,” Kevin James stars as the title character, a single, suburban dad, trying to make ends meet as a security officer at a New Jersey mall. Though no one else takes his job seriously, Paul considers himself on the front lines of safety. When a heist shuts down the megaplex, Jersey’s most formidable mall cop will have to become a real cop to save the day.

The DVD version features a widescreen presentation of the film, complemented by a Dolby Digital 5.1 audio track. Filled to the brim with bonus materials, the DVD will also contain a Commentary Track with Kevin James and Producer Todd Garner and a total of 9 Deleted Scenes. Further, the release dishes out a number of Featurettes, such as ”Action Sport Junkies,” “Fun On Set,” “On Set With Mike “Rooftop” Escamilla,” “The Burlington Mall,” “Stunts,” “Mike V. vs Mall Cop,” “Mall Cop Response,” “Free Running vs. Parkour” and “Thoughts With Kevin James.”

The Blu-Ray version arrives as a 2-disc set with a cool 1080p high definition transfer, of course, and a high definition audio track. All the extras from the DVD version will be included and in addition you will find a CineChat feature on the disc.