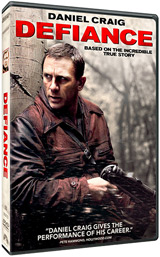 Directed by Academy Award® winner Edward Zwick (Blood Diamond), “Defiance” stars Daniel Craig, Liev Schreiber and Jamie Bell as brothers, simple farmers – outnumbered and outgunned – who turned a group of war refugees into powerful freedom fighters.  The inspirational story of family, bravery and survival is based on real events and will keep you on the edge of your seat as well.

The DVD version will feature an anamorphic widescreen transfer of the film with Dolby Digital 5.1 audio. In addition you will find a Commentary Track by director Edward Zwick on the disc, as well as a Making Of Documentary called ”Definace: Return to the Forest” that explores all aspects of production from the early stages of pre-production to shooting on location in Lithuania.  Edward Zwick and his creative team discuss some of the challenges and also the rewards of adapting this well-documented historical event into a feature film.

Also included are Interviews with the original Bielski family in ”Children of the Otriad: The Families Speak”, in which descendants of the Bielski family tour the film’s set and relate the story of the real-life partisans along with efforts to preserve the brothers’ legacy. Further, you will find a Photo Gallery of images taken by Edward Zwick including behind-the-scenes images and surviving members from the Bielski Otriad.

The Blu-Ray version features a 1080p high definition transfer, spiced up with a Dolby Digital 5.1 TrueHD audio track. In addition to all the bonus materials from the DVD version – presented here in high definition – you will also find the Featurette ”Scoring Defiance” on this version, in which Academy Award® nominated composer James Newton Howard and violinist Joshua Bell discuss the incredible film score for “Defiance.” The release is rounded out by the movie’s Theatrical Trailers.