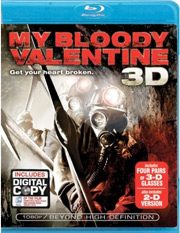 Lionsgate Home Entertainment has added My Bloody Valentine 3D for release on DVD and Blu-Ray Disc.

Ten years ago in the town of Harmony, an inexperienced coal miner, caused an accident in the tunnels that trapped and killed five men and sent the only survivor, Harry Warden, into a permanent coma. But Harry Warden wanted revenge. Exactly one year later, on Valentine’s Day, he woke up…and brutally murdered twenty-two people with a pickaxe before being killed. Now, after years of peace, something from Harmony’s dark past has returned. Wearing a miner’s mask and armed with a pickaxe, an unstoppable killer is on the loose. And as his footsteps come ever closer, the townspeople realize in terror that it just might be Harry Warden who’s come back…

The Special Edition DVD includes both the 2D and 3D versions of the film with bonus materials including audio commentary, two featurettes – “Deep Inside My Bloody Valentine” a behind the scenes look at the making of the film and “Sex, Blood and Screams” – the make-up FX from the film, deleted scenes and a gag reel..  It will come with four pairs of 3D glasses enclosed in the DVD.
“My Bloody Valentine 3D” on Blu-ray Disc contains both 2D and 3D versions, four pairs of 3D glasses plus all of the special features and a digital copy of the film.