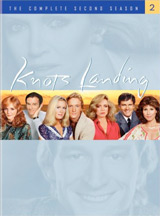 Warner Home Video has added Knots Landing: The Complete Second Season to their release line-up, scheduling the DVD set for an April showing.

Season Two of this “Dallas” spin-off marks the introduction of one of television’s most infamous characters, Abby Cunningham (Donna Mills), who begins her legendary run of seductions and manipulations.  Long before “Desperate Housewives,” “Knots Landing” delved into the tempestuous lives and loves of five suburban families, who live in an always interesting, upper-middle class cul-de-sac.

This season, bed-hopping becomes the latest cul-de-sac sport. Who cheats? It’s simpler to list who doesn’t in this sizzling season of the long-running hit series. But wait, there’s more. J.R. and Bobby Ewing swap Texas drilling for California dreaming, a hitchhiker accuses Sid of rape, armed robbers hold the cul-de-sac women hostage, and the season ends with a shocking cliffhanger—literally—when Sid careens toward a seaside cliff!

The 4-disc set will include all 18 episodes from the show’s second season without any bonus materials and can be yours for $39.98 on April 14.