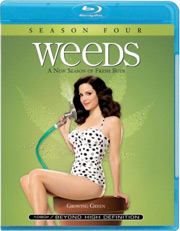 Lionsgate Home Entertainment has added the fourth season of the acclaimed showtime’s TV series Weeds to their line-up, scheduling the release on DVD and Blu-Ray Disc for June.

Mary-Louise Parker stars as Nancy Botwin, a single mom who resorts to dealing pot after her husband dies suddenly.  When an offbeat way to make ends meet grows into a mini-empire, the mother of all dealers finds she may be in over her head – and on the verge of taking everyone else with her.  Last time we saw her, Nancy’s business (and house) was going up in smoke.  So the Botwin bunch has relocated near the border for a fresh start with some new buds.

Arriving as a 3-disc DVD set, the release will contain all 13 episodes of the show’s fourth season along with special features including select Episode Commentaries with cast and crew memvers, numerous Featurettes and Interviews, as well as a Gag Reel.

The 2-disc Blu-Ray version will feature the same bonus materials, as well as BonusView Commentaries with Kevin Nealon and Justin Kirk and will be BD Live enabled.
“Weeds: Season Four” an be yours to own on June 2 for $39.98 on either DVD or Blu-Ray.