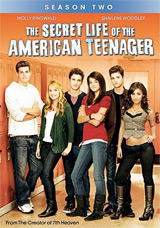 Life goes on at Ulysses S. Grant High School in the second season of this hit drama about the complications of teenage pregnancy. Ben (Ken Baumann) has been asking Amy (Shailene Woodley) to marry him — so many times, in fact, that she’s considering accepting. Meanwhile, Ricky (Daren Kagasoff), the baby’s father, is going through his own drama. Former teen queen Molly Ringwald reprises her role as Amy’s mother.

No details about the release have been announced yet, but expect “The Secret Life of the American Teenager: Season Two” to come to stores around the country on June 16 for $39.99.