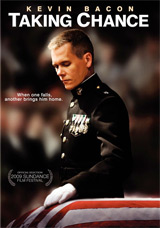 HBO Home Video has added the incredible drama Taking Chance to their DVD release line-up, scheduling the film for a May release.

Based on the true experiences of Lt. Colonel Michael Strobl, who wrote eloquently of them in a widely circulated 2004 article, “Taking Chance” is a profoundly emotional look at the military rituals taken to honor its war dead, as represented by a fallen Marine killed in Iraq, Lance Corporal Chance Phelps. Working as a strategic analyst at Marine Corps Base Quantico in VA, Lt. Col. Strobl (Kevin Bacon) learns that Phelps had once lived in his hometown, and volunteers to escort the body to its final resting place in Wyoming. As Strobl journeys across America, he discovers the great diligence and dignity in how the military, and all those involved with preparing and transporting the body, handle their duties. Equally important, he encounters hundreds of people affected by Chances death, a vast majority of whom never knew him. This collective grieving eventually causes Lt. Col. Strobl, a veteran of Desert Storm now assigned to office duty, to probe his own guilt about not re-deploying to Iraq for the current conflict. Arriving in Wyoming, Lt. Col. Strobl completes his catharsis when he encounters Chances gracious family and friends, and discovers an extraordinary outpouring of community support.

The DVD features the original fullframe version of the film with a Dolby Digital 5.1 audio track. No extras have been announced to accompany the feature film.