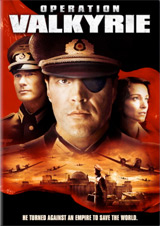 With the Tom Cruise blockbuster still lingering to appear on home video, Genius Products is jumping in, scheduling the direct-to-video production Operation Valkyrie for release on DVD in May.

“Operation Valkyrie” tells the astonishing true story about a bold German plot to assassinate Adolf Hitler — and the man who risked everything to make it happen. Sebastian Koch (The Lives of Others) stars as Claus von Stauffenberg, a once-idealistic German army colonel whose exposure to wartime atrocities and personal battle injuries move him to conspire to eliminate the power-crazed Führer. The heroic tale remains a fascinating, must-see example of the German resistance to Hitler’s oppression.

This German production will feature an anamorphic widescreen transfer of the film with Dolby Digital 5.1 audio in German and English. No bonus materials have been announced.