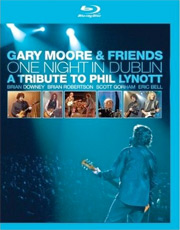 Rock fans will rejoice to hear that Eagle Rock Entertainment has just announced a Blu-Ray version of Gary Moore: One Night In Dublin – A Tribute To Phil Lynott. The 2005 concert that was an all-out celebration of the late Thin Lizzy frontman, with performances of Thin Lizzy’s greatest songs.

Former Thin Lizzy guitarist extraordinaire Gary Moore gathered his original band comrades to pay tribute on that night and brought in drummer Brian Downey, guitarists Scott Gorham, Eric Bell and Brian Robertson, as well as Jethro Tull bassist Jonathan Noyce. On this day (which would have been Lynott’s 56th birthday), this group shook Dublin with a bevy of their worldwide hits.

“Gary Moore: One Night In Dublin – A Tribute To Phil Lynott” will be available in stores on April 21 for only $24.98.