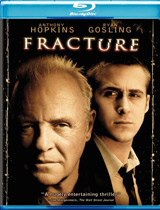 New Line Home Video has added a Blu-Ray version of the thriller Fracture to their June release line-up.

Academy Award® winner Anthony Hopkins and Academy Award® nominee Ryan Gosling are trying to outsmart each other in this suspenseful thriller. Ted Crawford (Hopkins) brutally murders his wife and calmly waits for the police to arrest him. With the weapon and a signed confession in hand, Deputy D.A., Willy Beachum (Gosling), believes a conviction is a slam dunk; that is until the case completely unravels. Now, with little evidence, Beachum goes head to head with the cunning Mr. Crawford in a desperate search for the truth and the answer to one burning question: How is this guy getting away with murder?

The release will offer up a 1080p high definition transfer of the film with high definition audio. As extras you will find the Deleted Scenes and Alternate Endings from the DVD version on this release also.