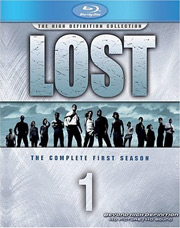 The third and fourth seasons of the cult TV series Lost has been available on Blu-Ray for some time, and fans will rejoice to hear that Buena Vista Home Entertainment has now added blu-Ray versions of Season One and Season Two to their release schedule also.

In Lost: Season One, stranded on an island that holds many secrets, 48 people must band together if they hope to get home alive. Now you can experience the nonstop excitement and mystery of every episode, from the show’s stunning first minute to its spectacular finale.

The release will contain all the bonus materials found on the previous DVD box set also, though this time presented in high definition. Look for Commentaries, Featurettes and more.

In Lost Season Two the drama reaches new heights as the survivors of Oceanic Flight 815 discover they are not alone in their battle against “The Others,” and a contested decision to open the hatch reveals a new realm of mystery and intrigue.

This release will also contain the many bonus features previously found on the DVD version, such as deleted scenes, bloopers, flashbacks, featurettes and more.