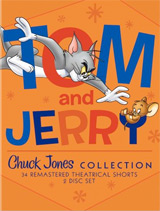 Warner Home Video has just announced that the studio will release Tom And Jerry: Chuck Jones Collection in June, offering up all 34 theatrical shorts produced by animation legend Chuck Jones on a single release.

The Chuck Jones era of “Tom and Jerry” cartoons began when the famed animator was engaged to head a newly formed animation department at Metro-Goldwyn-Mayer in 1963.  This new chapter in Jones’ career followed his nearly 30-year tenure at Warner Bros. where he honed his very distinctive style of art and comedy, creating some of the most memorable films of all time.

Jones brought his own unique sensibilities to the characters of Tom and Jerry, giving the cartoons a contemporary feel, and relying more on subtlety and satire for comedy vs. the more traditional slapstick gags of the earlier Tom and Jerry cartoons. This collection from Warner Home Video brings these shorts to DVD, together for the first time, completely re-mastered in their original theatrical widescreen format for stunning picture and sound quality. The 34 shorts will be available in a two-disc set, featuring new collectible slipcase packaging and two new Bonus Documentaries, ”Tom and Jerry…and Chuck” as well as ”Chuck Jones:  Memories of a Childhood”.

For $26.99 this DVD set can be yours when “Tom And Jerry: Chuck Jones Collection” will find its way to stores around the country.