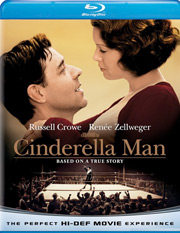 Academy Award winners Russell Crowe and Renée Zellweger star in this triumphant, powerfully inspiring true story. In a time when America needed a champion, an unlikely hero would arise, proving how hard a man would fight to win a second chance for his family and himself. Suddenly thrust into the national spotlight, boxer Jim Braddock would defy the odds against him and stun the world with one of the greatest comebacks in history. Driven by love for his family, he willed an impossible dream to come true.

Featuring a 1080p high definition transfer and DTS 5.1 HD Master Lossless Audio track, the release will also carry over the extras form previous releases, including the 3 Commentary Tracks by Ron Howard, Akiva Goldsman and Cliff Hollingsworth. The Featurettes ”The Fight Card: Casting Cinderella Man,” “For the Record: A History in Boxing,” “Ringside Seats,” “Jim Braddock: The Friends & Family Behind The Legend,” “Pre-Fight Preparations” and ”Lights, Camera, Action: The Fight From Every Angle” will be included also, as wellas the original Braddock Vs. Baer Fight Footage and a Photo Montage. Further look for the Cinderella Man Music Featurette on the disc, together with the Featurette ” The Human Face of the Depression” and a Russell Crowe’s Personal Journey in which he recollects becoming Jim Braddock. The disc is rounded out by The Sound Of The Bell and a selection of Deleted Scenes with Optional Commentary.