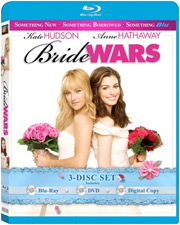 Best friends Emma (Anne Hathaway) and Liv (Kate Hudson) have always dreamed of being married at the Plaza Hotel in the month of June.  Planning on wedding their respective husbands-to-be, everything seems to be going perfectly – the dates are set, their dresses are beautiful and the maids of honor – each other – are as joyful as can be.  However, when the pair of friends receives the bad news that their weddings were planned for the same day, the pre-wedding bliss is ruined.  With neither willing to give up her dream wedding, Liv and Emma declare themselves to be engaged in the most heated and dangerous kind of war known to man: The Bride Wars.

A single-disc DVD version will offer up the film with Deleted Scenes and the Vera Wang Featurette ”The Perfect White Dress”.

The Blu-Ray Disc version on the other hand will come on 3 discs, featuring a high definition presentation of the movie itself, as well as a DVD version of the film and a Digital Copy. In addition, the release will contain a number of of cool extras, such as”
Something Old, Something New and What That’s Gonna Cost You”, a Pop-Up Wedding Cost Calculator. You will also find Seven Deleted Scenes on the release, including an Alternate Opening, as well as Cast Improvisations. Next up will be two Fox Movie Channel Presents production featurettes about Kate Hudson and Anne Hathaway. The release will also sport a number of Featurettes entitled ”Meet Me at the Plaza”, “The Perfect White Dress – Vera Wang”, and “Caught on Tape.”.