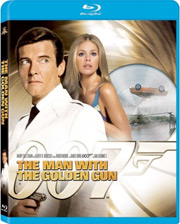 The fourth wave of Bond titles has been announced days before the release of wave three. License to Kill and The Man with the Golden Gun will arrive in May.

Licence to Kill marks Timothy Dalton’s first release on Blu-ray. The disc comes with two audio commentaries; one by director John Glen and cast and the second with Michael G. Wilson and crew. Several deleted scenes are included along with the featurettes Bond ’89, On the Set with John Glen, On Location with Peter Lamont, Ground Check with Corky Fornoff, 007 Mission Control – Interactive Guid into the World of License to Kill, Exotic Locations Montage, Inside License to Kill and a production featurette along with a stunt film music video, trailers and photo galleries.

Another two loaded discs brings the total number of Bond titles to 13 on May 12th.