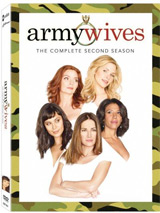 The Army has its code. The wives have theirs. Four women and one man face the challenges of
making a life for themselves while trying to stay connected to spouses who may be shipped off at any minute and abiding by the military’s strict traditions. These five very different people forge an unbreakable bond as they help one another through the unthinkable and protect each other’s darkest secrets.

The release will offer an anamorphic widescreen transfer of the TV series as well as a Dolby Digital 5.1 audio track. As extras you will find Audio Commentaries on the release , as well as Bloopers and Deleted Scenes. Also included on the release are the Featurettes ”Active Duty” taking a look at the Cast of Army Wives at Fort Bragg, ”Operational Intelligence” discussing how the filmmakers got the Army’s Support, ”The Tribe” taking you behind the scenes with the cast and ”Army Wives Give Back”.

“Army Wives: The Complete Second Season” will be released on June 2 and has a suggested retail price of $45.99.