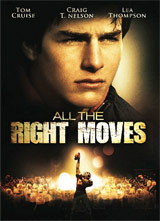 20th Century Fox Home Entertainment has added a new DVD version of the 1983 film All The Right Moves to their DVD line-up.

The only way football star Stefan Djordjevic (Tom Cruise) will avoid a life in the blast furnaces of his bleak Pennsylvania hometown is by winning a college scholarship. Even his coach (Craig T. Nelson) dreams of parlaying a winning team into a college job far away from this graveyard of the American Dream. But it’s not too long before the two virtually ruin each other’s chances for escape and their door to the future starts to close. Lea Thompson and Christopher Penn co-star.

Arriving as a bare-bones DVD, the film will be presented in anamorphic widescreen with Dolby Digital audio. Most interesting however, the DVD will carry a really low $9.98 sticker price when it will come to stores on May 19.