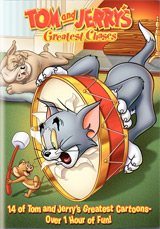 Warner Home Video has added Tom And Jerry’s Greatest Chases: Volume 2 to their release line-up, scheduling the DVD for a June release.