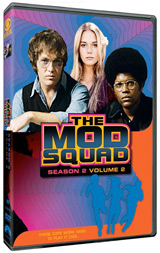 Paramount Home Entertainment has finally added the second season of the classic TV series The Mod Squad to their release schedule.

Meet Pete, Linc and Julie: The Mod Squad. This trio consisted of rich, long-haired Pete Cochran, Lincoln “Linc” Hayes from the tough streets of inner city Los Angeles, and beautiful flower child Julie Barnes, a runaway from San Francisco. They’re recruited by police captain Adam Greer (Tige Andrews) for a covert unit that will help bridge the generation gap. Each week these three cops with love beads wrestled with criminals – and their own consciences. They may have been the “fuzz,” but they were determined to never compromise their values. They were “The Mod Squad!”

Offering up the show in its original fullframe presentation the DVD set will offer over 11 hours worth of episodes but will not contain any extras.