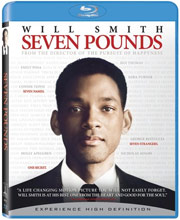 Sony Pictures Home Entertainment has just added Seven Pounds to their release schedule, lining up a DVD, UMD and Blu-Ray Disc version of the film for release in April.

Will Smith stars as Ben Thomas, a man at a crossroads searching for a way to redeem his heavy conscience. He discovers he has the power to change the circumstances of seven strangers who deserve a second chance. But when one of them captures his heart, he must decide if he should reveal his secret — even if it means giving up on his plan.

On the DVD version, fans will get to see a widescreen presentation of the movie with Dolby Digital 5.1 audio. The release also includes a number of extras, suc has a Commentary Track with Director Gabriele Muccino as well as a selection of Deleted Scenes. Also included are the Featurettes ”Seven Views on Seven Pounds,” “Creating the Perfect Ensemble,” “Emily’s Passion: The Art of the Printing Press” and “The Box Jellyfish: World’s Deadliest Co-Star”.

The Blu-Ray version will feature a 1080p high definition transfer and also deliver a Dolby Digital 5.1 audio track. The extras on this release will be identical to those on the DVD with no materials exclusive to this version.

As expected, the UMD version will feature only the movie without any extras.