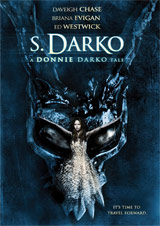 20th Century Fox Home Entertainment has scheduled the release of S. Darko: A Donnie Darko Tale on DVD and Blu-Ray Disc this April.

Seven years after her brother’s death, Samantha Darko finds herself stranded in a small desert town after her car breaks down where she is plagued by bizarre visions telling of the universe’s end. As a result, she must face her own demons, and in doing so, save the world and herself.

The 103-minute sequel to the critically acclaimed “Donnie Darko” will arrive in widescreen with a 5.1 Dolby Digital audio track on DVD, while the Blu-Ray version will feature a DTS 5.1 HD Master Lossless Audio track and a 1080p high definition transfer. No bonus materials have been announced yet for the film but should be forthcoming very shortly.