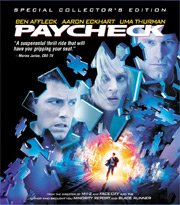 Paramount Home Entertainment has just added a Blu-Ray version of the sci-fi thriller Paycheck to their line-up, scheduling the title for a May release.

Based on the short story by science fiction author Phillip K. Dick, in a futuristic but familiar world, a high-tech engineer whose memory has been partially erased must use a group of unrelated objects, including a wire, a ticket stub and a bus token as clues to discover the truth about his previous identity, and collect a paycheck he had been awaiting.

Further you will find 7 Deleted Scenes on the disc, together with the Featurettes ”Paycheck and ”Tempting Fate”.