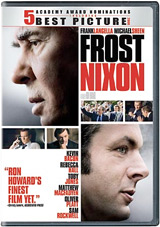 For three years after being forced from office, Richard Nixon remained silent. But in summer 1977, the steely, cunning former commander-in-chief agreed to sit for one all-inclusive interview to confront the questions of his time in office and the Watergate scandal that ended his presidency. Nixon surprised everyone in selecting David Frost as his televised confessor, intending to easily outfox the breezy British showman and secure a place in the hearts and minds of Americans. Likewise, Frost’s team harbored doubts about their boss’ ability to hold his own. But as cameras rolled, a charged battle of wits resulted. Would Nixon evade questions of his role in one of the nation’s greatest disgraces? Or would Frost confound critics and bravely demand accountability from the man who’d built a career out of stonewalling? Over the course of their encounter, each man would reveal his own insecurities, ego and reserves of dignity— ultimately setting aside posturing in a stunning display of unvarnished truth.

The DVD version will offer up a widescreen version of the movie with Dolby Digital 5.1 audio and contain a Commentary Track by director Ron Howard, as well as a number of Deleted Scenes. Also included is The Making Of Frost/Nixon, taking an in-depth look at all aspects of the production and allowing viewers to discover the lengths it took to recreate this historic event for the big screen. Also included is The Real Interview, offering up footage from the actual interview and how it compares to the way it was reenacted for the film. The release will be rounded out by The Nixon Library giving you access to the materials that have been preserved for public viewing in the Richard Nixon Library, ranging from the “Nixon Tapes” to footage of Nixon visiting China.

The Blu-Ray version of the film will feature a 1080p high definition transfer with DTS 5.1 HD Master Lossless Audio. In addition to all the bonus features found on the DVD version, the Blu-Ray version will feature even more Deleted Scenes, a powerful Video Archive called “The Nixon Chronicles”, allowing viewers ro experience powerful archival video of the original interviews alongside the shot-by-shot recreations in the movie. Plus, view more background details about this intense, important moment in history. Further, the release will contain a Picture-in-picture Video Commentary as well as the Featurette ”Discovering Secrets”, in which Director Ron Howard, producer Brian Grazer and the entire production team discuss the many “secrets” of the
era that were uncovered as they researched the project. Also look for a BD Live addition on the disc, giving you access to even more bonus materials through the Internet.