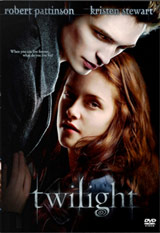 Summit Entertainment has just unveiled plans to release the box office sensation Twilight on DVD and Blu-Ray Disc in March.

High School student Bella Swan (Kristen Stewart) doesn’t expect much when she moves to the small town of Forks, Washington, until she meets mysterious classmate Edward Cullen (Robert Pattinson)—a boy who’s hiding a dark secret. Impossibly good-looking and extremely private, Edward is unlike anyone she has ever met—in more ways than she realizes. He and his family are vampires. As their worlds and hearts collide, Edward must battle the bloodlust raging inside him as well as a coterie of undead that would make Bella their prey. Based on the #1 New York Times best-seller by Stephenie Meyer, “Twilight” adds a dangerous twist to the classic story of star-crossed lovers.

Arriving as a 2-disc DVD set the film will feature a widescreen presentation with Dolby Digital 5.1 audio. As extras you will find a Commentary Track with director Catherine Hardwicke, Robert Pattinson and Kristen Stewart on the release, as well as a selection of Deleted and Extended Scenes.

Also included are three Music Videos a Comic-Con Phenomenon Featurette and a 7-part Documentary covering every step of the film-making process.

The Blu-Ray version will arrive in 1080p high definition in the movie’s original 2.40:1 aspect atio, supplemented by a DTS 5.1 HD Master Lossless audio track and will also contain all of the DVD’s extras.