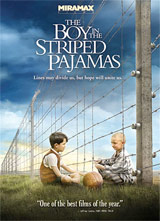 Miramax and Genius Products have just announced the release of the touching drama The Boy In The Striped Pajamas in March.

Based on the best-selling novel by John Boyne, “The Boy In The Striped Pajamas” is “an unforgettable motion picture experience powerful and moving beyond words” (Pete Hammond, Hollywood.com). Bored and restless in his new home, Bruno, an innocent and naive eight-year-old, ignores his mother and sets off on an adventure in the woods. Soon he meets a young boy, and a surprising friendship develops. Set during World War II, this remarkable and inspiring story about the power of the human spirit will capture your heart and engage your mind.

No details have been announced yet but the film is scheduled for a release on March 10 with a $29.99 sticker price.