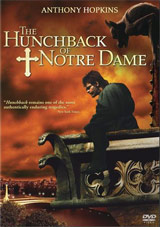 Sony Pictures Home Entertainment has just added a DVD version of the 1982 TV production The hunchback Of Notre Dame to their release line-up, scheduling the Anthony Hopkins movie for a March release.

Quasimodo, the hunchbacked bellringer of Notre Dame’s cathedral, falls in love with the beautiful gypsy dancer, Esmeralda. When Esmeralda is arrested for lewd dancing, she catches the eye of Quasimodo’s guardian, the archdeacon of the cathedral. Further unwanted affections are lavished upon her by a poor street poet. But Esmeralda’s love is reserved for a handsome soldier. When a mob accuses Esmeralda of being a murderer and a witch, Quasimodo must rescue her by claiming sanctuary for her in the cathedral.

The release will offer up the original fullframe presentation of the film its english mono audio track. No extras will be included.