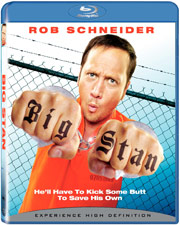 HBO Home Entertainment has added the latest Rob Schneider comedy, Big Stan to their release schedule, bringing the film to DVD and Blu-Ray Disc in March.

Rob Schneider stars as Stan Minton a two bit con man that is found guilty of cheating mostly elderly women out of their retirement saving on fraudulent vacation properties. With the help of his crooked lawyer, Lew Popper (M. Emmet Walsh), Stan is able to postpone his jail sentence for six months in order to tidy up his affairs. Stan quickly goes into a depression that not even his gorgeous and bubbly wife, Mindy (Jennifer Morrison), can pull him out of. However, when Stan receives news from an ex-prison inmate that his frail and weak body will be targeted and “loved” by all of the large men in jail, Stan realized his “tender parts” are on the line and as a last ditch effort he enlists the help of a mysterious martial arts guru know only as The Master (David Carradine).

Over the course of the remaining months, The Master transforms Stan into a lean and mean fighting machine much to the dismay of Mindy who cannot see past The Master’s other “abilities” such as eating Scorpions at the dinner table and smoking a hundred cigarettes a day.

Stan is finally shipped off to jail and he soon realizes that prison is not at all like he imagined – it’s worse! Thankfully Stan has been trained well and he soon brings the warring gangs together and establishes peace inside the prison walls. This is much to the disgust of the prisons Warden Gasque (Scott Wilson) who has been hatching an evil plan to shut the prison down and sell off the land to a Vietnamese development company that he just so happens to be a silent partner in. Gasque offers Stan a deal that will get him out of prison far ahead of schedule if he’ll help him with his diabolical plan. With the clock ticking, Stan must decide between his own freedom and protecting the lives of the inmates that he has grown to respect.

The film arrives with a Commentary Track by director/producer/actor Rob Schneider and his cast members Buddy Lewis and Salvator Xuereb. Also included is the Making-Of FEaturette ”Comedy Is Pain” and a series of Outtakes.