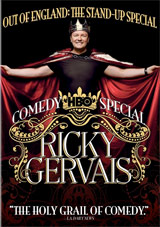 Taped live before a sold-out audience at the WaMu Theater at Madison Square Garden in New York City, the special puts the spotlight on Gervais’ distinct, understated humor and offbeat observations. A high-spirited hour of comedy, “Ricky Gervais: Out of England”  includes material from Gervais’ three sold-out British stand-up tours, featuring his unique take on a wide range of disparate issues such as fundraising, fame, nursery rhymes, Nazis, moronic friends and obesity.

The release will also contain an Extended Interview with Ricky Gervais when it arrives in stores around the country on March 31 with a $19.97 suggested retail price.