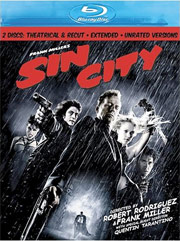 Buena Vista Home Entertainment has added a Blu-Ray version of Sin City to their release line-up, scheduling the eagerly awaited title for April.

Arriving as a 2-disc set, the release will contain the theatrical cut of the film as well as the unrated Director’s Cut and be chock full with over 6 hours of bonus materials.

Also included is an all-new Cine-explore Feature and a series of Featurettes with titles such as ”Austin, Texas Audience Reaction Track,” “How it Went Down: Convincing Frank Miller to Make the Film,” “Special Guest Director: Quentin Tarantino,” “A Hard Top With A Decent Engine: The Cars of Sin City,” “Booze, Broads & Guns: The Props of Sin City,” “Making the Monsters: Special Effects Make-up,” “Trench Coats & Fishnets: The Costumes of Sin City” and a Sin-Chroni-City Interactive Feature. 2 Theatrical Trailers will round out this disc.

The second disc, featuring the Recut version of the movie will also arrive with a DTS 5.1 HD Master Lossless Audio track and contain an all-new Kill-Em Good Interactive Comic Bookand another set of Featurettes, such as ”The 15 Minute Flick School,” “The Movie in High-Speed Green Screen- All Green Screen Version”, “The Long Take” and “Sin City Live in Concert.” Robert Rodriguez’ famed 10 Minute Cooking School will also be included on this disc.