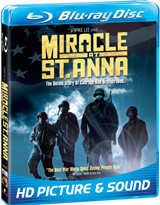 Considered on of Spike Lee’s best films, “Miracle At St. Anna” will feature only the feature film on DVD, while only the Blu-Ray version will contain a number of cool extras, such as a selection of Deleted Scenes, the Featurette ”Deeds Not Words” in which Director Spike Lee and World War II veterans share their intimate experiences from the Great War at the historic Harlem Veterans’ Club, and discuss how their service to their country is remembered and immortalized in the annals of history and in the films of Hollywood. Also included is ”The Buffalo Soldier Experience”, a Featurette that traces the history of the Buffalo Soldier with historians, Director Spike Lee and the cast, and hear rare firsthand accounts of the deep personal bond that was forged between the soldiers and the Italian citizens during World War II.