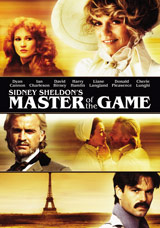 Paramount Home Entertainment has just added the TV mini series Master Of The Game to their release line-up, scheduling the release for March.

Based on Sidney Sheldon’s bestselling novel, the miniseries debuts on DVD in a 2-disc set 25 years after its network premiere. The lavish, international saga spans a century and focuses on the Blackwell family’s rise to wealth from 1890s South Africa where the family’s fortune is made in diamonds to the primary story of iron-willed Kate Blackwell, the driven, power-hungry head of the family’s embattled corporate empire.