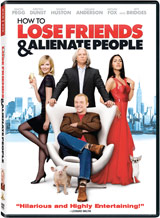 MGM Home Entertainment has added How to Lose Friends & Alienate People to their release line-up for a February release on DVD.

The film follows the escapades of Sidney Young (Simon Pegg), a small-time aspiring British celebrity journalist who is hired by an upscale magazine after catching the attention of Clayton Harding (Jeff Bridges) during an event by creating a ridiculous scene with the help of a wild pig. Turning in a new direction, Sidney begins his descent into success and re-establishes himself from lonely outsider to confidante of starlet Sophie Maes (Megan Fox), and enters into a love affair with colleague Alison Olsen (Kirsten Dunst) that will either make him or break him.

The release will feature an anamorphic widescreen presentation of the movie with a Dolby Digital 5.1 audio track and also come with a Commentary Track by director Robert Weide and star Simon Peg. Also included is the Making-Of Featurette ”Sharp Interviews”.