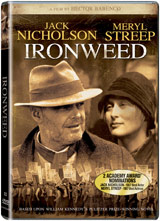 Lionsgate Home Entertainment has added Ironweed to their release line-up, scheduling the DVD release for February.

Hector Babenco’s bittersweet film, based on the Pulitzer Prize-winning novel by William Kennedy, stars Jack Nicholson as Francis Phelan, a drunken former baseball player running away from life and the painful, guilty memories that haunt him. Set in the winter of 1938, Ironweed features Francis wandering the streets of Albany, New York, with his pal Rudy (musician Tom Waits) looking for odd jobs, cheap drinks, and flophouses. Meryl Streep costars as Helen Archer, Francis’s longtime girlfriend and partner in drink. Together they lament the misery of life and ponder their tragic pasts, hoping to find a way to free themselves from their troubled lives.

For only $14.98 this release can be yours when it will be available in stores on February 24.