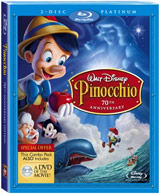 CES is in full swing, and announcements are coming quick. Disney has released a good deal of great information today.

Lost is catching up with the first and second seasons coming to Blu-ray in the spring. Sin City is coming to Blu-ray (although no word yet on which version or versions will arrive. Pulp Fiction, Good Will Hunting and Sling Blade will also be coming as catalog titles.

On the animated front, the next Platinum title has been announcecd, and it’s Snow White and the Seven Dwarfs . Like Sleeping Beauty and Pinocchio, Snow White will come with a DVD attached and hopefully as complete a package as Sleeping Beauty has proven to be.

On the Pixar front, still no word on the long promised Finding Nemo, but Bug’s Life and Monsters Inc. are both coming and should be top rate Blu-rays if Pixar’s previous discs are any indication.