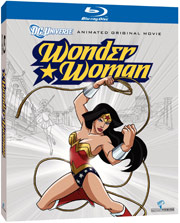 From Warner Home Video comes the superheroine Wonder Woman, making it to Blu-Ray Disc in March.

On the mystical island of Themyscira, a proud and fierce warrior race of Amazons have raised a daughter of untold beauty, grace and strength Princess Diana. When an Army fighter pilot, Steve Trevor, crash-lands on the island, the rebellious and headstrong Diana defies Amazonian law by accompanying Trevor back to civilization. Meanwhile, Ares (the god of War) has escaped his imprisonment at the hands of the Amazonians and has decided to exact his revenge – intending to start a world war that will not only last for centuries but will wipe out every living being on the planet, starting with the Amazons! It is up to Princess Diana to save her people and the world by using her gifts and becoming the ultimate Wonder Woman!

Offering a 1080p high definition transfer of the animated show, the release also includes “A Subversive Dream”, a Featurette that will explore the rich history of Wonder Woman and her inspiration on American culture. Further, the Documentary ”The Daughters of Myth” is part of the release, explaining the archetype and tradition of the female DC Comics Super Hero. Also look for the Next Upcoming DCU Sneak Peak and First Looks of Batman Gotham Knight, Justice League New Frontier & Wonder Woman, plus 4 Bonus Episodes of Justice League.