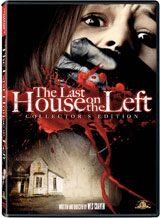 MGM Home Entertainment is working on a Special Edition re-release of Wes Craven’s 1972 shocker Last House On The Left, unleashing the terror once again in February.

Easy going Mari Collingwood and her fun loving friend Phyllis are on their way to a Bloodlust concert to celebrate Mari’s 17th birthday when three escaped convicts kidnap and torture them. But Mari and Phyllis are fighters, and although they are drugged and beaten into unconsciousness, stuffed in a car trunk and driven into the woods for even more brutality, they are still alive…. But for how long?

Offering up an anamorphic widescreen version of the movie with the film’s original mono audio track, the disc will also contain a Commentary Track featuring actors David Hess, Marc Sheffler and Fred Lincoln. A Wes Craven Featurette will also be included, profiling the cult director’s career in more detail. another Featurette included on the release is Celluloid Crime of the Century, as well as Scoring Last House, taking a look at the music of the film. Tales That Will Tear Your Heart Out is another Featurette found on the disc. You will also find the Deleted Scene “Mari Dying at the Lake” and a selection Never-before-seen Outtakes on the release.