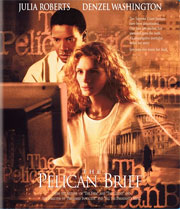 Two Supreme Court justices have been murdered and a lone law student (Julia Roberts) turns her suspicions about the deaths into a speculative brief that sends shock waves into the highest levels of government. She and a determined investigative reporter (Denzel Washington) want to tell the world what they have uncovered if they live to tell it. The race is on and these two are more than runners. They’re moving targets.

With a 1080p widescreen transfer and Dolby Digital 5.1 TrueHD audio, this release is sure to set your home theater system on fire with its intense action and suspense. Sadly no extras have been announced for the release, making it every bit of a bare bones affair as the DVD version.