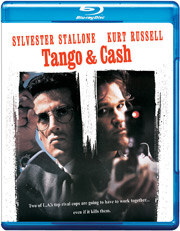 Warner Home Video has added the 1989 action comedy Tango & Cash to their Blu-Ray line-up for an April release.

Ray Tango (Sylvester Stallone) and Gabe Cash (Kurt Russell) are rival L.A. policemen with one thing in common: each thinks he is the best. Team them and theyre like oil and water. But frame them for a crime and theyre like a match and kerosene. Unjustly jailed among lowlifes they put behind bars, the two stage a prison breakout thats a breathless rush of weapons and wisecracks then roar after the shadowy crimelord (Jack Palance) who set them up. Tango & Cash are out to clear their names. Join them and feel the rush.

the disc will feature a 1080p high definition transfer of the movie in its original widescreen aspect ratio, but like the DVD version, it will be entirely devoid of bonus materials.