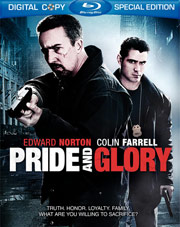 New Line Home Entertainment is putting the final touches to the action thriller Pride And Glory and will unleash its raw power in January on DVD and Blu-Ray Disc.

Four cops down: two dead, two likely. An NYPD drug bust has gone horribly wrong, and Detective Ray Tierney heads the investigating task force. He already has ties to the case. His brother was commander of the ambushed officers. His brother in law, a fellow officer, often partnered with them. The more Ray uncovers, the more those family ties are tested. And the more the fraternal order starts to fray.

The studio will offer two DVD versions, one of them a single-disc release featuring a widescreen and fullframe version of the movie without extras. A 2-disc Special Edition will also be available, also including a comprehensive Making-of Documentary called The Source Of Pride as well as a Digital Copy of the film.