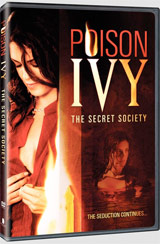 New Line Home Entertainment has added a DVD and Blu-Ray Disc version of the fourth installment of their franchise to their line-up, releasing Poison Ivy: The Secret Society in January.

After a mysterious death of a young college student occurs late one night at a prestigious New England college, Danielle “Daisy” Brooks nevertheless decides to escape her small town life and transfer herself to this prominent school. This naive country girl is determined to start a new life leaving behind a two year relationship and the ghosts of her parents who died nearly three years ago. Daisy knows that she must break away from her past in order move on and find out what she’s ultimately made of.