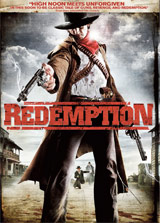 A new DVD publisher, North American Motion Pictures is arriving on the scene and the studio is preparing their 2008 theatrical movie, Redemption for release on DVD and Blu-Ray Disc in February.

A genre-busting Western where there is no low, no good guys; only the bad and the worse, Frank Hardin (Dustin James) is no stranger to the unlawful west, he is a killer. However, because of a tragic event, he must battle his own worst enemy. Hell couldn’t be much worse!

The film will arrive in its original widescreen presentation with Dolby Digital 2.0 Stereo audio. As bonus materials, the release will offer up a Commentary Track, a Stills Gallery and a Behind The Scenes Featurette.