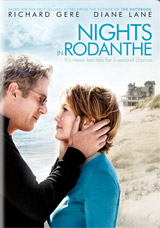 From Warner Home Video comes the romantic drama Nights In Rodanthe this February, when the studio releases a DVD and Blu-Ray Disc version of the emotional movie.

The stars of “Unfaithful” rekindle their screen chemistry in this rich tale of hearts awakenings based on a bestseller by Nicholas Sparks (The Notebook, Message In A Bottle). Richard Gere is Paul, a surgeon who long ago unwittingly traded career for family. Diane Lane is Adrienne, a devoted mother trying to move on after her husbands infidelity and struggling with his desire to return to their marriage. At a remote inn on the Outer Banks, Paul and Adrienne expect to do some serious soul-searching. But an approaching storm forces each to turn to the other for strength, setting the stage for a life-resonating romance.

Offering up a widescreen version and a fullframe transfer on the same disc, the DVD version will contain a number of Deleted Scenes, a Featurette the Gavin Rossdale Music Video.

The Blu-Ray version will come with a 1080p transfer and high definition audio, and will include the same extras found on the DVD.