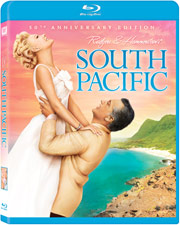 Adapted from Rodgers and Hammerstein’s Pulitzer Prize-winning musical, now enjoying a Tony Award-winning smash hit revival on Broadway, “South Pacific” follows a Navy nurse forced to choose between love and prejudice during World War II. Brought to the screen by director Joshua Logan, with a screenplay by Paul Osborn, “South Pacific” was nominated for three Academy Awards taking home a statue for Best Sound, and features rousing performances from Rosanno Brazzi and Mitzi Gaynor in her Golden Globe-nominated role.

This Blu-Ray version will feature a 1080p high definition transfer of the movie with high definition audio. It will also include a numer of bonus materials, such as an all-new feature-length Documentary called ”Passion, Prejudice and South Pacific: Creating An American Masterpiece”. Also included is Mitzi Gaynor’s Screen Test, a Making-of Featurette, Vintage Stage Excerpts from the original Broadway version and Sing-a-long Subtitles.