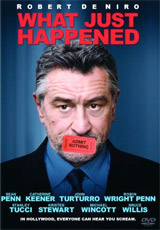 Magnolia Home Entertainment has just added the comedy What Just Happened, starring Robert DeNiro, to their line-up, scheduling the film to hit DVD and Blu-Ray Disc in February.

“What Just Happened” is a winningly sharp comedy about two nail-biting, back-stabbing, roller-coaster weeks in the world of a middle-aged Hollywood producer.

With a star-studded cast that also features Sean Penn, John Turturro, Catherine Keener, Robin Wright Penn, Stanley Tucci and Bruce Willis, this film, directed by Barry Levinson, will arrive in its original widescreen presentation. As extras it will contain a Commentary Track and Deleted Scenes, as well as a Behind-the-scene Featurette.