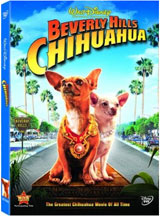 The discs will include an audio commentary with director Raja Gosnell, deleted scenes, including additional deleted scenes on the Blu-ray only, the featurette Legend of The Chihuahua and bloopers. The Blu-ray will also carry the featurettes Pen Pals: The Voices Behind the Dogs and Hitting Their Bark: On Set With The Dogs of Beverly Hills Chihuahua and BD-Live content.