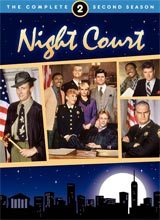 Warner Home Video has just added Night Court: The Second Season to their DVD line-up, scheduling the release for February.

The 3-disc DVD set will contain all 22 episodes of the show’s second season and can be yours to own on February 3 for only $29.98.